#loveproject – 20 paintings given to Lucca

#loveproject – The plan, says Keane, is to “place two paintings from each of us in five of the most important piazzas of Tuscany’s five most important cities: Florence, Siena, Livorno, Pisa and Lucca. Anyone who wants them can take them away, at no cost. Absolutely free.”

The second group  of  #loveproject paintings were installed in the second Tuscan city which gave their patronage to the project – this time, the City of Lucca.

As can be seen from the image above, the major piazza’s of the city were host (for a least a limited time) to a series of paintings from Fabrizio Da Prato and Keane.

Within hours all 20 paintings had been removed by person or persons unknown  – the #loveproject is once again in full swing.

Which will be the next city to participate ? – watch this space or check up on the artists at work site  – www.artistsatwork.it

The Love Project in the cradle of the Renaissance 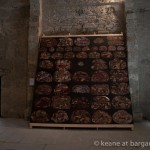 The most conventional chapter in the saga of the Love Project is the exhibition that opened it — and even that had its unusual twists. On the 13th and the 14th of June, the well-known local artists Keane and Fabrizio Da Prato  inaugurated a joint exhibition of 100 paintings. The venue was not a gallery in Barga or Lucca, but a deserted 13th century church in the long-deserted (and now slowly gentrifying) village of Isola Santa, rising like a ghostly medieval wraith over a lake deep in the forested Apuan Alps.

All 50 of Keane’s works were portraits of biroldo, the classic blood sausage of the Garfagnana region. The human heart, mostly but not exclusively in its familiar iconic form, is the subject of all 50 da Prato canvases. The 100 paintings had been carefully documented by photographer Giorgia Madiai.

The mostra was scheduled for just two days, with the paintings offered for sale. After that, very little was predictable. 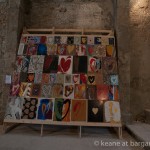 The plan, says Keane, is to “place two paintings from each of us in five of the most important piazzas of Tuscany’s five most important cities: Florence, Siena, Livorno, Pisa and Lucca. Anyone who wants them can take them away, at no cost. Absolutely free.”

The rub is that no one will be informed exactly where — or when — the gratis works will appear for the taking. The schedule will be stretched out over at least six months. If things go according to plan, the artists or their representatives will be on hand to watch what happens. Da Prato says they may even set up video cameras. Will passersby simply grab a biroldo or heart and walk off with it? Will they react in bewilderment or suspicion and pretend to ignore the paintings? Will those who do pick one up look furtive? Or blithely unembarrassed? Will crowds gather and discuss the event’s meaning?

“The idea is to provoke conversation and exchange, both in the piazzas themselves and at an online site we are designing. Our intention is to get people thinking about the role that art does or can play in contemporary life,” explains Keane. Adds Da Prato: “It is also to make a statement about the commercialisation of art, about our tendency to value only those objects that carry a price tag.”

It’s no accident that this unorthodox project is focused on Tuscany, the cradle of the Renaissance, where the role and value of art have been debated for nearly a millenium.

The two men, who have been collaborating since founding the group “Artists at Work” 25 years ago, prefer to leave analysis of the exhibition’s themes and title to their audience. But they are willing to share a few thoughts of their own. “Blood, obviously, is one thing biroldo and the heart have in common,” notes Da Prato. “The scope of my subject is global and universal — everyone, everywhere, recognizes that iconic depiction of the heart. But Keane’s attention is focused very locally, on a traditional food that is consumed in a small, isolated region, under a name that hardly anyone outside that region has ever heard.”

Like his earlier exhibitions on the “Mutande di Barga” (the undergarments its citizen dry outside in full view of their neighbours) and the bas-reliefs of the Duomo, says Keane, “the biroldo paintings are about local identity, giving visibility to what is essential but often unremarked upon in a traditional culture.”

Not the least of the project’s challenges is convincing the mayors of their five target cities go along with the give-away plan. Some may be nervous about the longterm effect of encouraging citizens and visitors to abscond with works of art. As for the mostra’s title, Da Prato accounts succinctly for the fact that it is not in Italian despite the setting. “English always works better on search engines,” he said.

Music in the piazza at Da Aristo