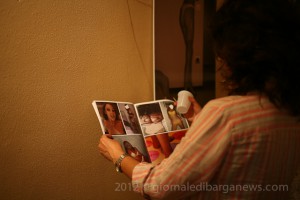 The Glory Hole – by Fabrizio Da Prato and Keane – The undoubtedly provocative title which we have used for our work “the glory hole” alludes to our interpretation of the nebulous confines between art, eroticism and pornography.

This exhibition, Shameless, focuses on shame as a negative emotion and one which has a direct discrediting impact on the individual and their position in society.

We are using that concept and the glory hole as a starting point for our work and as it is effectively a “diaphragm” between public and private shame and shamelessness, censorship and approval.

Artist statement about the work by Keane

For me this was a continuation of a theme that has been running through my work for the last 10 to 15 years exploring the concept of privacy and public domain and just how our conception of privacy has been changing rapidly in the digital revolution.

The Mutande of Barga in 1996  which then caused such a scandal in the city  had more or less nothing to do with eroticism at all but everything to do with public and private domain.

and the last series:  The Nuns of Barga featured the small group  of surviving nuns here in the city –  all walking away from us,  not one  showing us her face.  Again privacy  in the public domain was the main theme behind these paintings.

And so for the shameless exhibition I decided to focus my attention on people meeting via the Internet for anonymous sex.  Contact groups flourish on the net where people post naked images of themselves but covering up the eyes or using photoshop or one of the simpler digital  digital  software to hide their identity.

In many cases  in these images  the room that they were photographed in is completely visible and no longer anonymous.

It is that somewhat disjointed dichotomy between the almost banal and mundane view of of an open door leading into the bathroom or the bedroom with family photographs plainly visible on the walls  in the background whilst they are standing there completely naked and showing us all,  apart from the eyes.

The second part of the exhibition was  the creation of a pseudo-porno magazine featuring these found images from the Internet and digitally altered images from Fabrizio Da Prato.

We wanted to see if we could touch a nerve,  a memory,  which apparently many men have experienced of at some point in their lives of finding a discarded pornographic magazine somewhere out in the streets or hidden in hedgerows.

There was something in the colour of these magazines or the shapes which could be instantly recognised as possibly being pornographic even if they were seen from a moving bicycle or slow-moving car.

Our pseudo-porn magazine very nearly was not published in time for the exhibition as Apple who we were using to print the work refused on the grounds that the images were of questionable content.

It is our belief that  this recognition and then refusal to print questionable content was in fact software and not a human decision as it is unlikely considering the huge amount of images running through that service that they could be checked by humans.

It is much more likely that software flagged the images,  which are then probably checked by operator and then refused.

The e-mail refusing to print magazine then became part of the work.

You can download your own copy of the magazine here: shameless