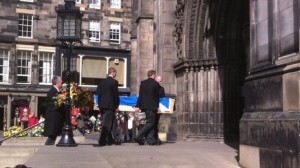 The cortege set off at 12:00 from Port Seton before stopping off at the main harbour on the way to St Giles Cathedral.

The service began at 13:30. It was followed by a private burial, attended by close family only.

Bellany died at age 71 in his studio in Italy, on 28 August. His family said he was found holding a paintbrush.

First Minister Alex Salmond and artists Richard Demarco and John Byrne were among those who paid their last respects at a funeral service in Edinburgh.

The artist’s three children paid tribute to their father during the celebration of his life at St Giles’ Cathedral on the city’s Royal Mile.

Paul Bellany said: “He immortalised on canvas and paper almost everyone he met, be they lords or lorry drivers, saints or sinners and even my beloved cats and dogs.

John Bellany was born in Port Seton in East Lothian, and died at age 71

“He was always inspiring, brave and bold, and although now sadly gone, he is still inspiring.

“The skipper has gone, sailed on into an Eyemouth sunset, but his spirit remains and I only need to look into the eyes of the characters upon any of his vibrant canvases to know that the fire still blazes and will blaze on for many years to come.”

Jonathan Bellany described his father as a “real life force” who did everything “full blast” and was “always the life and soul”.

He paid tribute to “my best friend, my favourite artist and the best father I could ever have dreamed of having”.

Anya Bellany Sparks said she felt “like an essential part of myself has been lost forever”.

She said: “And it is a good part, a part that is always open to thought and light and possibilities. Thank you dad for being my giant. I’m going to miss you so much.”

Born in Port Seton in East Lothian, he had trained at the Edinburgh College of Art in the 1960s and then in London.

His works were exhibited and collected around the world.

Bellany was born into a family of fishermen and boat builders in 1942 and much of his work is said to draw inspiration from his coastal roots.

The artist successfully under went a liver transplant in the 1980s and was made a CBE in 1994.

He had suffered three heart attacks, including one outside his own exhibition in Glasgow, but even that informed his work.

His paintings feature in the collections of galleries including the National Galleries of Scotland, Tate Britain in London and the Museum of Modern Art in New York.

Sir John Leighton, director general of the National Galleries of Scotland, said Bellany would be celebrated as one of the greatest Scottish artists of the modern era.